AD Ports, which controls 10 ports and terminals in Abu Dhabi, the UAE’s largest emirate, received seven Gold Awards, six Silver Awards and four Bronze Awards – the largest haul in its history, it said. The latest edition of the awards had attracted some 3,800 nominations.

Among its recognitions were ‘achievements in growth’, ‘best digital process automation solution’, ‘communication department of the year’ and ‘marketing campaign of the year’. 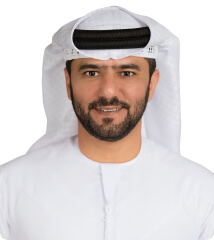 AD Ports Group was established in 2006.

The company manages more than 550 square kilometres of industrial and commercial space within ZonesCorp and the Khalifa Industrial Zone Abu Dhabi, or KIZAD.

In its latest earnings statement, the group said its second-quarter revenues had risen by 35 percent year on year to US$338 million, driven by results in the maritime and economic cities/free zone clusters. Net profit had surged by 59 percent to US$82 million, and EBITDA by 41 percent to US$145 million, it said.

Capex reached US$436 million, in line with the group’s investment plans to spend more than US$4 billion across all clusters through to 2026. Notable investments during the quarter included an expansion at Khalifa Port and additions to the group’s vessel fleet.

“In Q2 2022, we continued to invest heavily in order to deliver future growth. Moreover, we have also benefitted from the macro picture in the Gulf region, and in the UAE in particular,” Al Shamisi said.

“Not only have oil prices been increasing sharply, which has accelerated the country’s economic growth, including the non-oil economy, but AD Ports Group is also well-positioned to be one of the key beneficiaries of Abu Dhabi’s industrial strategy, which aims to more than double the size of its manufacturing sector to AED 172 billion (about US$47 billion) by 2031.”

AD Ports Group is an exhibitor and sponsor at Breakbulk Middle East 2023, taking place on 13-14 February at the Dubai World Trade Centre, Dubai.