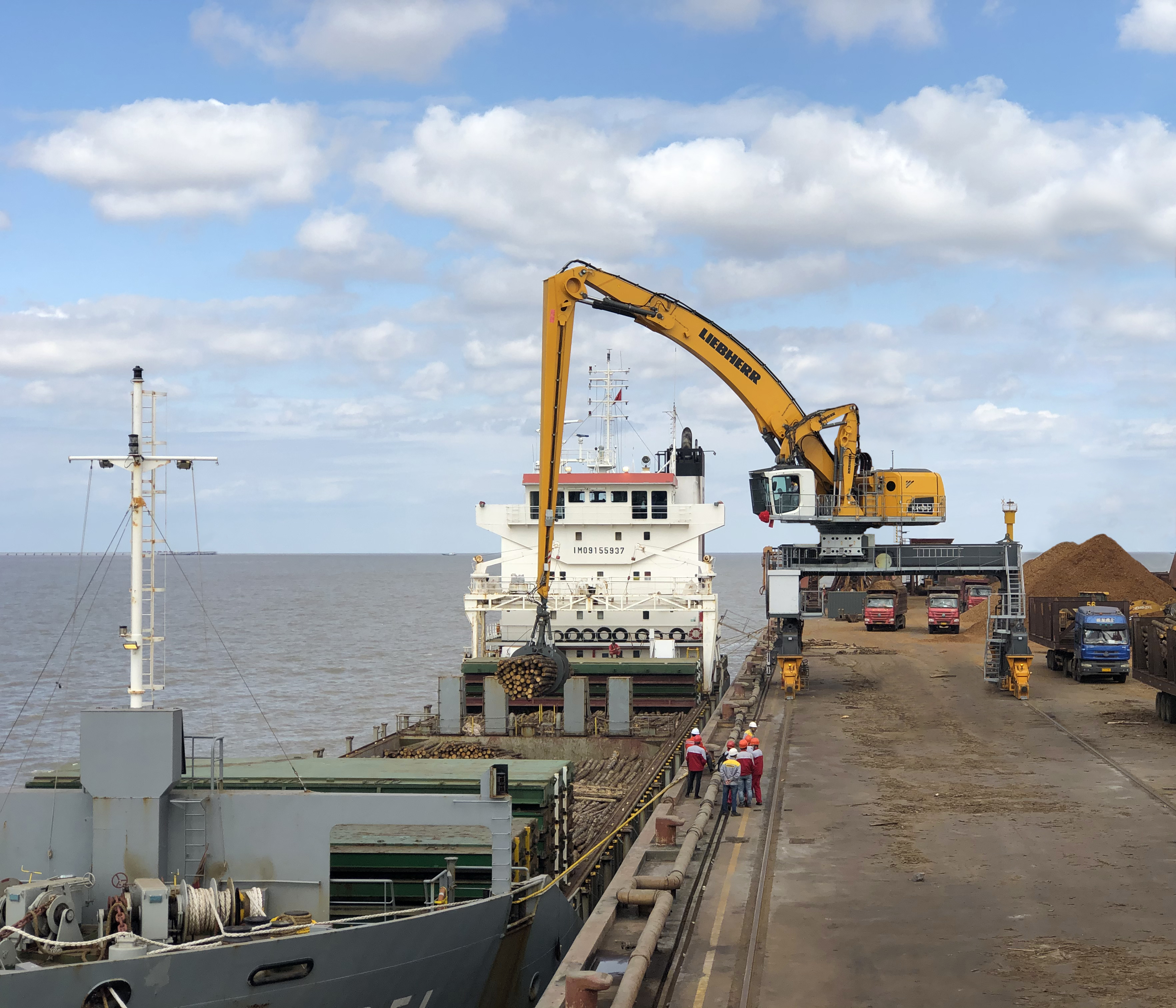 The LH 150 ET Gantry Port Litronic is the world's largest, electrically-operated Liebherr port handling machine with gantry undercarriage. The entire port handling machine has been supplied by Liebherr: All components were developed, produced and tested by Liebherr-Hydraulikbagger GmbH in Kirchdorf an der Iller, Germany; from the attachments to the work equipment, the hydraulic cab elevation and uppercarriage. The rail-mounted portal of this giant was developed in close cooperation with Liebherr- MCCtec Rostock GmbH.

With an operating weight of approximately 200 tonnes, the LH 150 ET Gantry Port Litronic is the largest port handling machine ever made by Liebherr. Fitted with Liebherr's standard ERC system, in addition to the engine power, it can also store energy when lowering the equipment available. This allows the LH 150 ET Gantry Port Litronic to achieve an output of up to 614 kW with energy savings of 30% at the same time. An additionally integrated high-voltage transformer reduces the 10 kV supply voltage of the local mains network to 400V which is then used to operate the main drive of the machine, a 400 kW Liebherr electric motor.

Together towards a customized machine​

Liebherr's port handling machine is specifically tailored to meet the customer's requirements. For example, the uppercarriage has not been seated in the conventional manner, centrally on the rail mounted portal. Instead it has been positioned off-centre, towards the side facing the sea. With its 16.5 m long, angled boom and 15 m long, straight stick, the LH 150 ET Gantry Port Litronic can cover the entire working area of a 10 thousand tonne timber-handling ship and more than 70% of a 30 thousand tonne timber-handling ship. The freely positionable spacious cab provides the operator with a perfect view and the Liebherr hydraulic quick coupler system is used to change the mechanically operated attachments quickly and safely from the cab.

For Liebherr, it was very important to involve the customer in each stage of the overall project. Technicians from DaFeng Port were present in the manufacturing facility in Kirchdorf an der Iller during the assembly process in order to gain in depth knowledge about this bespoke Liebherr machine. Engineers from Liebherr-Hydraulikbagger GmbH provided support in DaFeng Port for the entire build, commissioning and operator training.

Representatives from the earthmoving division travelled to Dafeng, Jiangsu, to take part in the handover celebrations. As part of the ceremony Joachim Strobel (Managing Director Sales, Liebherr-EMtec GmbH) symbolically handed a large golden key to the General Manager of DaFeng Port, Ji Xiaobo. Operation of China's first electrically- operated port handling machine in the 200-tonne category started officially with the handover. This marks a milestone in the close partnership between Liebherr and DaFeng Port.

During the handover ceremony, Ji Xiaobo emphasized that "The use of the electrically- operated port handling machine is of huge importance to DaFeng Port and our goal of developing DaFeng Port as a "green port". The LH 150 ET Gantry Port Litronic will also help DaFeng Port achieve an annual handling capacity of 100 million tonnes.”

With the successful introduction of two Liebherr A 934 C material handling machines, DaFeng Port initially considered large-scale handling operations in order to improve the efficiency of timber handling. Following an extensive analysis phase as well as various visits to Liebherr material handling machines already in operation, DaFeng Port was ultimately won over by the capability of the LH 150 ET Gantry Port Litronic and decided to purchase it.

Vice General Manager Lin Feng was also impressed by the high level of efficiency of Liebherr's port handling machine: "The LH 150 ET Gantry Port Litronic is 2.5 times more productive than jib cranes for unloading wood. This shortens the waiting times of the ships and significantly reduces the cost of unloading the timber per tonne. This means that the operational efficiency of our port increases considerably making DaFeng Port more competitive."

In total, approximately 207,000 containers and 51.14 million tonnes of material were handled in the port in 2018. DaFeng Port is the most important hub in the center of Jiangsu province. It is making enormous efforts to develop its four business areas of loading/unloading wind turbine blades, the timber trade, the RO-RO service and grain processing and to increase their efficiency. Captions
liebherr-LH-150.jpg
The first electrically-operated Liebherr port handling machine in the 200-tonne category is now in operation in DaFeng Port in China.