Why the Middle East is your next project cargo market

Breakbulk Middle East is the portfolio’s fastest growing event – and it’s easy to see why with regional activity heating up.

Throughout this key geography, settling neatly between Europe and Asia proper, a wide-range of large-scale projects and investments are taking place. Of course, there is oil & gas, but renewable energy is becoming more of a focus, as well as huge infrastructure projects.

The cargo carrying contract opportunities throughout the region are only ready to expand. So, let’s take a look at exactly why the Middle East demands your attention.

Breakbulk in the Middle East

Take CMA CGM for example. According to Stéphane Berninet, CMA CGM’s Head of Project Cargo, his company has been handling higher volumes of oversized, out-of-gauge freight.

“We had a 12% growth in breakbulk trade volumes in 2018,” Berninet explained. “CMA CGM is involved in all industrial segments driving project cargo volumes. Yachting & boating, energy, renewables, EPC, transportation and various heavy industries for all kinds of oversized and heavy lift cargoes.

“There’s a certain energy coming the GCC and the Middle East. Projects still largely revolve around oil & gas, but that doesn’t paint the whole project cargo picture. Infrastructure investment is getting a big boost too. Investment has increased in clean, green and renewable energy sources, mainly with solar and nuclear power projects, while interest in wind projects is on the rise.”

“As a sector, breakbulk represents a complex market encompassing commodities as varied as steel and forest products, to heavy-lift shipments for wind turbines and equipment for construction work. This variation exposes the sector to macroeconomic trends that have to be addressed by both market segment and geography.

“UAE and governments across the region are looking to build more diverse and integrated economies. Thus, despite the downturn in the past few years, the overall signs point towards a stronger macroeconomic picture as we move closer to 2020. It is also expected that competition from bulk carriers and container ships will also decline.”

The economic situation is of course worth watching, but there is a huge variety of projects hitting the Middle East. Let’s take a look.

Expo 2020 – a a major source of heavy lift contracts

Expo 2020 is part of the World Expo series of events, taking place in Dubai, UAE in November 2020.

This spectacle requires a hefty construction plan, and it’s expected projects will still be underway until Expo opens.

This major event has already been a key driver of project cargo activity at Dubai’s flagship Jebel Ali Port.

Run by DP World UAE, Jebel Ali has witnessed a significant upswing in heavy lift freight, as CEO and MD for the UAE Mohammed Al Muallem told Logistics Middle East: “The demand for handling breakbulk and special project cargo is expected to rise sharply in the months ahead in view of Expo 2020 Dubai. DP World UAE Region is working to ensure that Jebel Ali Port is ready to fulfil its role as the premier gateway for Expo-bound cargo,” he added.

The nature of Expo freight loads is means it requires an expert touch. For instance, amongst the largest pieces of equipment passing through Jebel Ali was a gigantic domed steel trellis. The trellis, which will form part of Expo 2020’s centrepiece weighted in at an incredible 2,265 tons. It was shipped to Dubai from Italy before moved by road to the Expo site.

Just some of the projects either ongoing or completed under the Expo 2020 banner include:

• Dubai Water Canal – A $545m canal with waterfront features. Completed in 2016, a series of extensions are being tendered in 2019.
• Museum of the Future – Recently completed, this $200m museum complex is one of Dubai’s latest tourist attractions and something of an architectural marvel.
• Dubai Creek Harbour – A upcoming luxury residential masterplan, aimed at being here times the size of the current city centre, alleged to boast the world’s tallest twin towers upon completion.

However, this isn’t the whole picture. The Middle East is one of the hottest regions for construction and infrastructure investment right now. 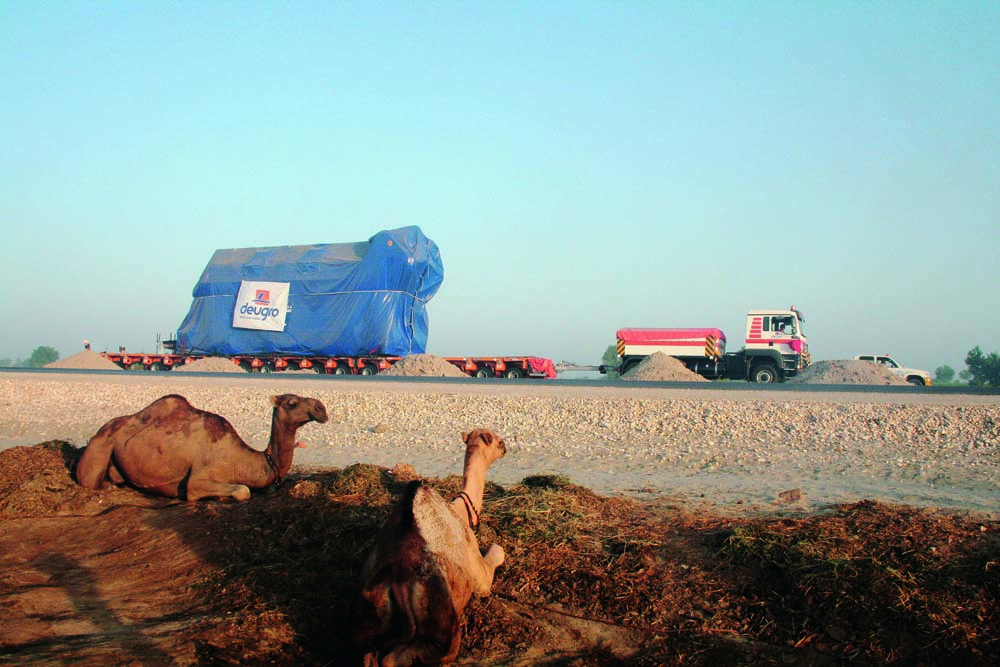 The influence of Expo 2020 aside, infrastructure projects are massive throughout the UAE and further gulf states.

The United Arab Emirates alongside its neighbour Saudi Arabia are regional drivers of rail and urban rail projects, for instance. Collectively, there is over $6bn in rail projects alone occurring or planned in the region right now.

Projects such as the Route 2020 Dubai Metro Red Line expansion are nearing completion, with 70% of works completed as of July 2019.

Kuwait has one of the most ambitious light railway projects in the region. At a cost of $3bn, tis 157km rail route would connect all states in the UAE, as well as Saudi Arabia. While Bahrain has no plans to connect its own links with Saudi Arabia until 2023, it is still forging ahead with a $2bn light rail project of its own.

This being the Middle East, an area rich with energy money, its ambitions are second to none when it comes to major infrastructure undertakings. One of the potential biggest being discussed right now is an underwater route connecting Dubai and Mumbai. Although this is still only in the conceptual phase, it highlights the impressive scale UAE project originators have when it comes to infrastructure.

Overall, there is a substantial volume of construction work underway throughout the Gulf states. The UAE accounts for 52% of GCC construction spending at a cool $818bn. Saudi Arabia has plans to invest to $1.61bn in infrastructure enhancements and upgrades, folding into a wider $2.43 trillion construction spend.

Saudi Arabia is also planning construction of a brand-new city, Neom, at a cost of $500bn. This would include smart systems, an abundance of residential, commercial and power-related construction projects, with final completion expected by 2025.

From here, it’s clear to see why the Middle East will be a focal point for project cargo moving forward – long after Expo 2020 has closed.

It’s worth pointing out that, for transport & logistics, the Middle East performs well. The UAE alone ranks 12th worldwide for water and maritime transport infrastructure performance, and 9th for Air transport.


Energy remains a strong project focus in the Middle East

Both oil & gas and renewable energy are major investment and project cargo drivers throughout the Middle East.

Egypt, for instance, has the $11bn Tahir Petrochemicals Complex up its sleeve. Construction is expected to kick off in 2019 and continue through to 2022 at this 3-segment facility, featuring naphtha crack, polystyrene and polypropylene units.

Kuwait also has $68bn in oil & gas projects either planned or under construction, including $4.3bn in developing resources located in the Lower Fars Heavy Oil Field in northern Kuwait.

Iraq is also attempting to overhaul its oil & gas project portfolio too. Its fields are in need of major refreshment and refurbishment regime after over a decade of conflict. Projects such as the $18bn Zubair Oil Field Rehabilitation Phase are underway, with project leaders Haliburton and Eni at the fore, necessitating movement of four to six rigs to the region.

Capturing further oil & gas related cargoes has been an important focus for Iraqi ports. At Bastra Gateway Terminal, for example, a number of berths have been installed in anticipation of heightened oil & gas activity.

Then there is renewable energy. Traditionally, with their abundant resources, GCC states have relied exclusively on hydrocarbons for both power generation and economic stability. Now, there is a region-wide trend towards boosting renewable energy.

Saudi Arabia is planning on launching five PV projects, with a capacity of 1.1 GW in 2019, alongside an 850 MW wind project. Despite only awarding two clean energy contracts in recent years, Saudi Arabi has set itself the goal of reaching capacity of green power generation capacity of 27.3 GW by 2024.

Elsewhere, we can find a number of Emirates investing in renewable projects to enhance their energy sectors. Abu Dhabi has at least 2.9 GW of solar power planned in a variety of developments.

Back to Kuwait, which is moving ahead with the Middle East’s largest PV project, expected to generate 1 GW of solar power once completed.

All told, the energy sector is always an important factor in project cargo contract generation.

Given the economic significance of oil & gas to Middle Eastern countries, it’s not a big leap to suggest this sector, alongside renewables, will keep breakbulk activity high throughout the region into the next decade and beyond.


The Middle East’s project cargo and heavy lift market is looking positive, based on the above trends and activity.